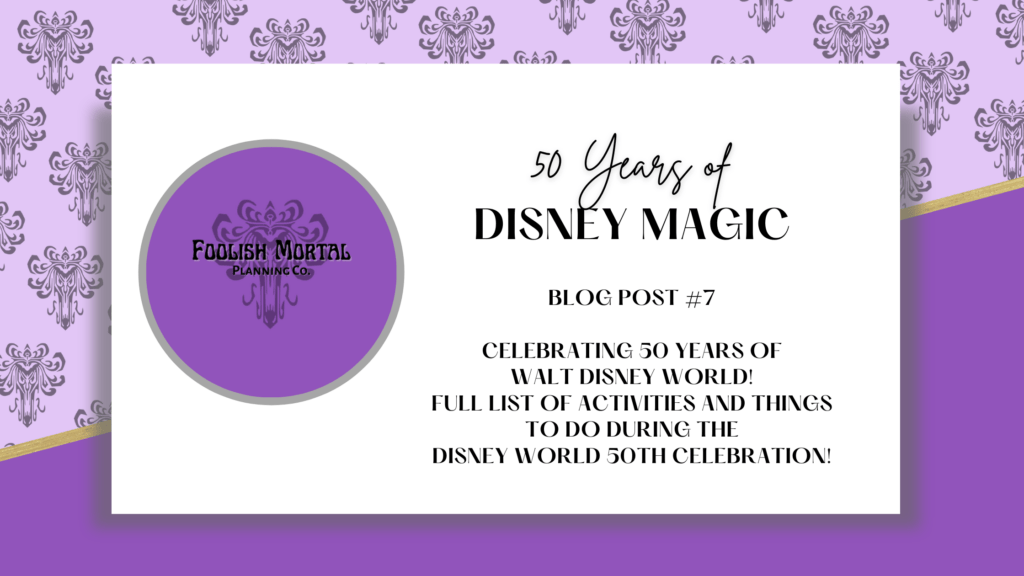 This week’s Blog we’re celebrating 50 Years of Disney Magic with 50 Disney World Facts plus a full list of 50th celebration activities! We hope you enjoy this trip right down the middle of Main Street USA with us (you know you sang it?)

There’s something downright magical when you approach the gates and enter Magic Kingdom. I’ll never forget the first time going back as an adult, passing under the Train Station onto Main Street USA. Choosing your path around or through the center island until you see the castle straight ahead. it was so exciting and breathtaking.

Watching our children’s faces as we entered and they saw the castle for the first time was amazing! Their eyes lit up with excitement and magic. Join us as we take a journey down memory lane and celebrate Magic Kingdom.

We had a lot of fun researching facts about Disney World, especially The Magic Kingdom. We hope you enjoy them:

Phew! That was a lot of facts! Now it’s time to celebrate with a full list of activities to do at Disney World for the 50th Celebration!

The 50th Celebration starts on Oct 1, 2021 and lasts for 18 months! The World’s Most Magical Celebration is sure to be spectacular with new rides, fireworks and entertainment.

There’s lots of time to plan a trip and experience 50 Years of Disney Magic! When you’re ready to plan your trip start with our customizable planner and free budget template.

Look for updates to this blog post as more information becomes available.

“May Walt Disney World bring Joy and Inspiration and New Knowledge to all who come to this happy place … a Magic Kingdom where the young at heart of all ages can laugh and play and learn together.” – Roy Disney, Oct 25, 1967

I’m Melissa, a self professed Disnerd and Ultimate Planner!   After taking my family on their first trip in October 2016, I found a passion for helping friends and family plan their trips.

For Time Saving WDW Planning Tips Enter your info below